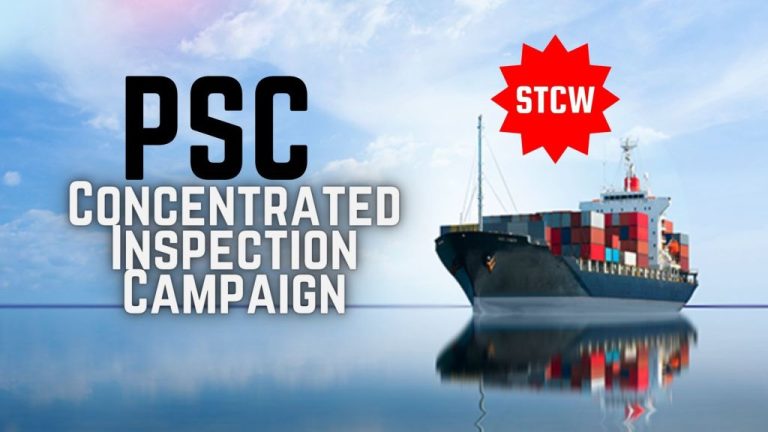 The PSC’s joint Concentrated Inspection Campaign (CIC) on Standards of Training, Certification and Watchkeeping for Seafarers (STCW) starts on 1 September 2022. The PSC regimes will maintain their focus on crew certification and competencies, as they have done for more than two years now during the COVID-19 pandemic.

Every year, the PSC regimes focus on a specific area for a three-month period. This CIC is commonly initiated by the Paris and Tokyo MoUs and will be joined by the majority of other PSC regimes.

Finally, we often observe that deficiencies in STCW certification and other operational requirements are likely to trigger an ISM-related deficiency, because they are affecting the Safety Management System (SMS).

Already some years ago, the Paris and Tokyo MoUs agreed to carry out a CIC on STCW lasting three months, from 1 September until 30 November 2022. Nearly all other PSC regimes – such as the Black Sea, Caribbean, Indian Ocean, Mediterranean, Riyadh, and Vina del Mar MoUs – have agreed to join this campaign. After the COVID-19 pandemic, the inspection numbers have returned to normal in most PSC areas, except in some countries or ports, for example China.

As always, the upcoming CIC will be included in routine PSC inspections, and every PSCO will be provided with a common additional checklist with focus items related to this year’s topic.

We anticipate that the CIC will not be limited to certification or document control due to several fake crew certificates and lack of competence of seafarers regarding their certification in the past. Therefore, DNV’s view is that one part of the CIC will focus on the evaluation of competences of the Master, officers and crew when performing duties and during emergency scenarios. These are explained in detail in Appendix 7 of Res. A.1155(32) “Guidelines for control of operational requirements”. This appendix was completely revised and published in the beginning of 2022. It covers a huge variety of operational inspection areas – from efficient communication between crew members, and assessing navigational controls such as ECDIS, to voyage planning or safe navigation, and witnessing emergency drills.

Familiarize the crew with their duties and with the additional checklist when published. (Source – Maritime Cyprus)