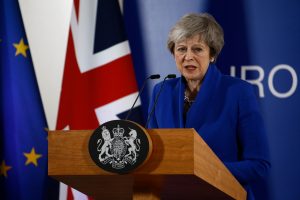 With the official Brexit departure date just days away, the entire future of Brexit, and the freedom from the CFP that fishermen have longed and fought for over so many years, is in peril, reports Tim Oliver.

Last week, MPs voted down Theresa May’s withdrawal deal, voted against leaving without a deal, and backed the PM’s call for a delay to the 29 March Brexit date, to 30 June.

Mrs May was set to put the withdrawal deal to MPs for a third time this week. She hoped that Brexiteers in her party and the DUP would back her deal as time runs out, rather than risk a possible long delay to Article 50, or even losing Brexit altogetherr… (read more)  source https://fishingnews.co.uk/news/brexit-meltdown/