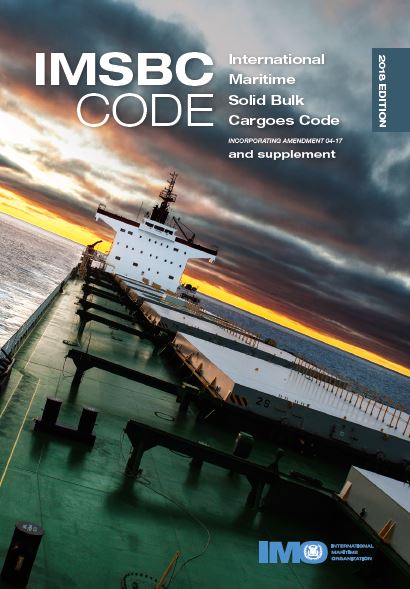 IMSBC Code & Supplement, 2018 Edition is out now. This new edition will not render obsolete the previous 2016 edition which will remain valid until 31 December 2018. The French and Spanish editions will follow later this year.

The IMSBC Code, adopted on 4 December 2008 by resolution MSC.268(85), entered into force on 1 January 2011, from which date it was made mandatory under the provisions of the SOLAS Convention. The present edition incorporates amendment 04-17, which may be applied from 1 January 2018 on a voluntary basis, anticipating its envisaged official entry into force on 1 January 2019. This publication also presents additional information that supplements the IMSBC Code, such as the Code of Practice for the Safe Loading and Unloading of Bulk Carriers (BLU Code, including BLU Manual) and Recommendations on the safe use of pesticides in ships applicable to the fumigation of cargo holds. The International Maritime Solid Bulk Cargoes Code and supplement is commended to Administrations, shipowners, shippers and masters and all others concerned with the standards to be applied in the safe stowage and shipment of solid bulk cargoes, excluding grain

For more information please contact our team on 01542 841245 or info@poseidonnavigation.com