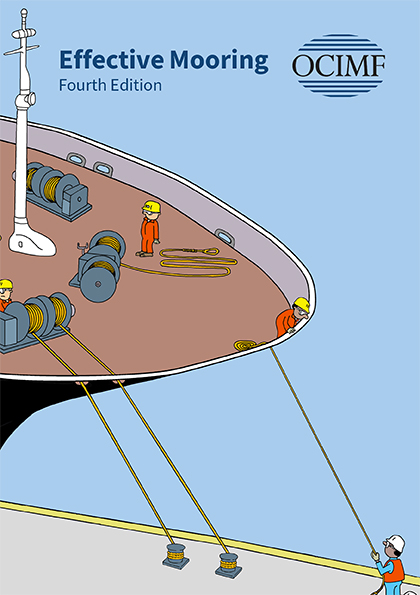 A look at what’s new – and what you might not have implemented yet. The fourth edition of the Oil Companies International Marine Forum (OCIMF) Mooring Equipment Guidelines (MEG4) was issued in July 2018. These revisions were brought in in response to changes in the design of the terminals and ships, the evolution of mooring lines and concerns over mooring lines failing under tension, which has resulted in serious incidents on board. MEG4 was developed by an industry working group which included representatives of various shipowner/operator organisations, shipping companies, terminal operators, cordage institutes, and classification societies. To date, however, there have been several non-compliances where ships have not yet implemented key changes.

MEG4 focuses on the safety of ship and terminal personnel. The fourth edition has been updated and revised with new chapters and key changes which include:

MEG4 supersedes MEG3 and Effective Mooring, Third Edition. It is primarily aimed at the hydrocarbon and chemical industry sectors, conventional tankers, gas carriers and the terminals at which they call.

In MEG3, MBL was defined as the minimum breaking load of a new dry mooring line as declared by the manufacturer. This gave rise to the misunderstanding that lines can be safely loaded up to their MBL with no failures or degradation. The concept of a safety margin was not understood, and shipowners expected that mooring line certificates must exactly match the MBL requested. For this reason, the use of MBL is now replaced in MEG4 by SDMBL, LDBF and WLL.

Onboard implementation of OCIMF MEG4

To ensure compliance with OCMIF MEG4, ship operators will need to establish and implement the following mooring procedures:

The MSMP will consist of:

MEG4 recommends that onboard mooring equipment and fittings, including mooring lines, are identified as critical equipment or systems.

New ships are expected to have information for all the above parts of the MSMP and LMP, while existing ships may need to engage the shipyard to collate the required information.

Due to the short timeframe between the launch of MEG4 and the implementation of the seventh edition of the SIRE Vessel Inspection Questionaire (VIQ7), ship operators should clearly detail any changes that have not been incorporated, the reasons behind this and the interim steps taken to mitigate any perceived risk. This will be particularly important in response to VIQ7 questions 9.2 on the Mooring Ship Management Plan and 9.3 on the Line Management Plan.

OCIMF’s release of the fourth edition of its Mooring Equipment Guidelines requires a significant change in how mooring systems will be designed, selected, maintained and retired. In addition, terminology has been clarified, a robust framework has been created to improve mooring line selection and purchase, and design guidance updated to improve mooring line longevity.

MEG4 promotes close cooperation between the ship naval architect, ship building yard, mooring equipment manufacturer, mooring line manufacturer and vessel owners and operators for safe use and long lifetime operation of mooring equipment on board the ships. This is further reinforced with references to the various planning procedures in the seventh edition of the Vessel Inspection Questionnaire (VIQ7).  Source – Seaways, The International Journal of The Nautical Institute, Bally Duggal AFNI.